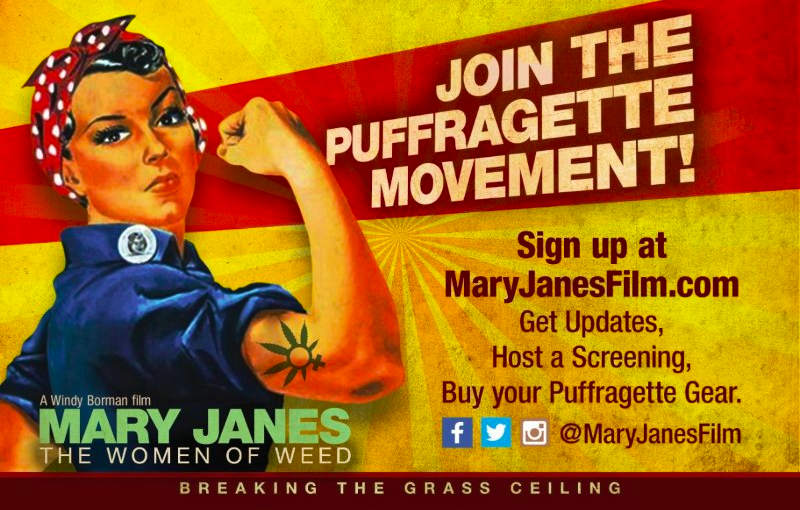 Windy Borman starts low and then goes high. Let me explain. Before filming for a year about the topic of women in weed for her documentary, Mary Janes: The Women of Weed, Producer, Writer, and Director Windy Borman had never consumed cannabis. In the film, moviegoers see Windy first experiment with Topical Relief Oil from Empower BodyCare to address neck pain. What happens next? You’ll have to see the film.

Women are changing the face of today’s fastest growing industry not dominated by men – cannabis. Did you know cannabis has more female-owned businesses than any other sector of American commerce? As Mary Janes powerfully explains, this is a movement of pioneers who bring the female voice to an industry built on a female plant.

Windy Borman is an impressive intrepid voyeur. She is a multi-award-winning film Director and Producer, as well as the founder of Green Mile Pictures, LLC. Her recent projects have premiered at Sundance and on HBO. Windy is the Founding Board Chair of Women in Film and Media Colorado. She created Mary Janes to highlight the successes of female entrepreneurs in the budding U.S. marijuana industry. Other credits include writing for Takepart.com and Indiewire: Women and Hollywood.  Windy is a real-life example of why we should all be feminists.

I feel compelled to mention filmmaker Windy Borman’s magnum opus and its cinematography because what’s on the outside sometimes matters equally to what’s on the inside, especially when we’re trying to demystify the stigma surrounding cannabis.  The cinematography here significantly contributes to creating an eye-catching and artistic effect that complements the filmmaker’s point of view. Cinematography is what makes everyday places and things feel larger than life. It makes cannabis look like a savior, which it is, of course.

The cinematic beauty of Mary Janes is something you won’t soon forget.  The aesthetics, the light, and the fluid segues between profiles of women warriors who work in weed are expertly designed to allow any person – no matter their level of sophistication with the topic – to understand the subject. This is a visually stunning film for a politically charged subject, and that means a lot.

Windy invests in smart, cutting edge professionals who help debunk myths about a plant that has suffered at the yoke of the same oppressive system that retains cannabis as an illegal substance. We hear the stories of a thriving industry where women occupy a large percentage of management roles. “Women hold 36 percent of leadership roles in cannabis businesses, much higher than the 22 percent of the workforce in general,” Windy explained during our recent phone interview.

Windy provides a dynamic background of the life of our beloved plant, and makes good use of screen time to give you a working vocabulary regarding cannabis. Where women hit the glass ceiling in other industries, they have cannabis.

I thoroughly enjoyed speaking to “Puffragette” (Puffragette = pot + suffragette) Windy Borman over the phone about the highs and lows of women who enter the cannabis business in the U.S.  As Founder and Editor of www.newsmunchies.com plus my role in raising a daughter makes the topic doubly personal to me. Windy’s documentary addresses the need to continue the role of women in science and technology who just happen to be dealing with marijuana.

“We need more women in mentorship, women working for women, to work to increase the scale of production, and to get prices down, while making corporate responsibility a priority,” Windy opines.

Highlights from the film include discussions on the role of corporate responsibility; criminal justice reform; racism; Big Pharma; environmentalism, farming, and sustainability; cannabis as a spiritual experience; edibles; federalism; veterans and PTSD; and intellectual property rights.

The film is about super smart women, who just happened to be in the cannabis business.  But unlike other films or television programs that try to tackle the many facets of cannabis, Windy gives the viewer a well-balanced film where the core issues are gender parity, sustainability, and social justice. Men, you better woman up. The future of cannabiz is female.

Mary Janes features personal stories to explore how cannabis is the first new female-driven industry to emerge in the 21st century, and the impact of its women leaders. “When we legalize marijuana we change the world,” Windy commented. This is a fearless lady boss I’m sure we’ll see a lot more of in the future.

“Now more than ever, it is important to highlight female leadership and celebrate the positive progress we’ve made toward human rights, social justice, and environmental sustainability,” enthuses Windy.

Join filmmaker Windy Borman as she explores the movement to end cannabis prohibition and the stereotypes surrounding it. Breaking the grass ceiling is achievable in our lifetime. For more information, visit www.maryjanesfilm.com.

Remember, women who lead are women of weed.