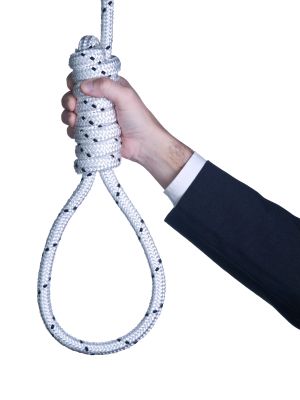 Roughly twenty-four hours after Newsmunchies radio aired the first in a two-part series on the death penalty, two bombs exploded at the Boston Marathon, killing three people and injuring 176.  Former Boston Police Commissioner Bill Bratton brazenly declared, “I think this act would be an appropriate use of the death penalty.”  What has emerged in the death penalty debate are three distinct points of contention, liberally peppered with bogus statistics.

Deterrence:  The argument most often cited in support of capital punishment is that the threat of execution influences criminal behavior more effectively than imprisonment does.  Mark Elliott, the Executive Director for Floridians for Alternatives to the Death Penalty, disagrees and argues most capital crimes are committed in the heat of the moment when logical thinking has been suspended. The death penalty deters crime by taking criminals off the street but how does it discourage murder if ideological radicalism motivates people like the Boston bomber?

Innocent People Die:  Carlos DeLuna, Troy Davis and Cameron Todd Willingham.  You do not know these names but you should.  In 1989, Texas executed Carlos DeLuna for a murder that he did not commit.  In 2011, Georgia put to death Troy Davis, a Black man who was likely innocent of the murder of a white off-duty police officer.  Texas in 2004 executed Cameron Todd Willingham for an arson-murder that an independent investigation found to be an accident.  You do not get another bite at the Lady Justice apple once an execution has been successful.

Retribution:  In Gregg v. Georgia, the U.S. Supreme Court recognized retribution—the desire to kill the person who killed someone close to you—as being a legitimate expression of society’s moral outrage at offensive conduct.  For some, retribution cannot come fast enough.  Larry Mann was executed in Florida recently for murdering Elisa Nelson and her brother insisted, “We just watched that same man slip into a very peaceful sleep. That’s a far cry from how my sister passed.”  For others, like Journey of Hope’s Bill Pelke, retribution is a one-way ticket to nowhere.  Although he initially supported the death penalty imposed on the girl who murdered his grandmother, Bill now campaigns against capital punishment.  “The death penalty continues the cycle of violence and creates more murder victims family members.”

Torture Statistics and They’ll Confess to Anything:  There are curious statistics bubbling over the capital punishment caldron from both sides of the debate, but the figures are colorless because they fail to account for the subtleties of human desire and capture merely what is on the surface.  Therefore, we must analyze whether those figures are logically compelling.  John Murphy, the Executive Director of the Ohio Prosecuting Attorneys Association reasoned, “More studies show that the death penalty is a significant deterrent to murder.”  I question how one can track the idiosyncratic intent of a murderer.  In short, statistics are like clay: they manifest themselves in whatever shape you want them to be, and thus the result is in the eye of the artist.

Coming Attractions:  I invite you to read my follow-up blog, “The Death Penalty as Effective Pest Control?”

One thought on “Dead Man Walking: A Framework for the Clash on Capital Punishment”