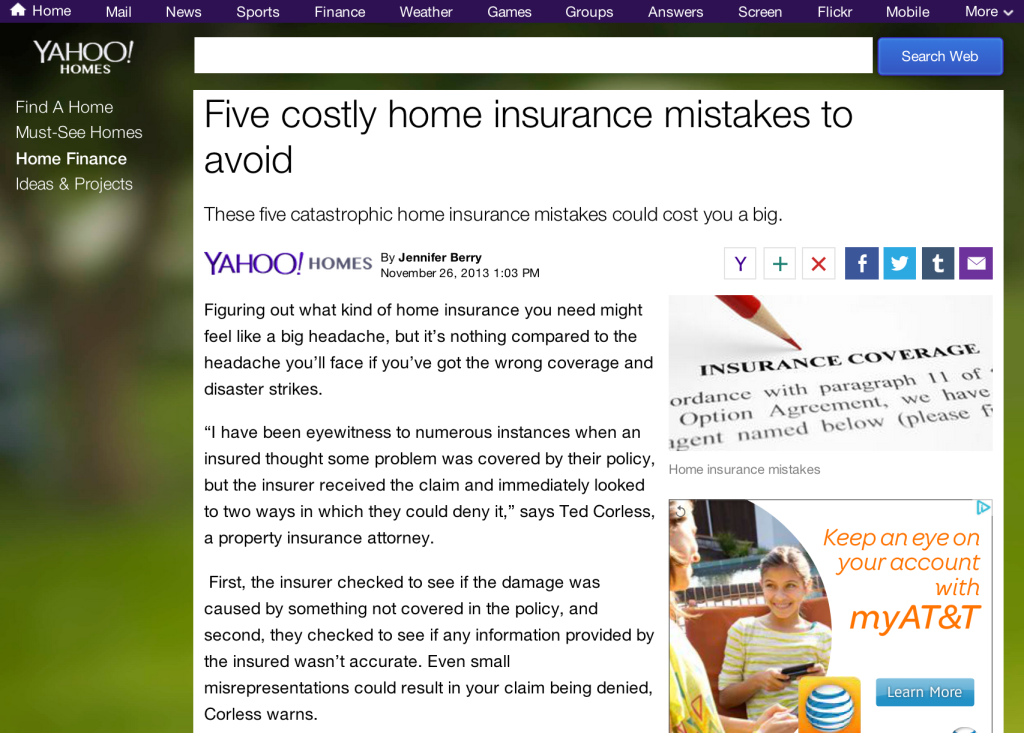 These five catastrophic home insurance mistakes could cost you a big.

Figuring out what kind of home insurance you need might feel like a big headache, but it’s nothing compared to the headache you’ll face if you’ve got the wrong coverage and disaster strikes.

“I have been eyewitness to numerous instances when an insured thought some problem was covered by their policy, but the insurer received the claim and immediately looked to two ways in which they could deny it,” says Ted Corless, a property insurance attorney.

First, the insurer checked to see if the damage was caused by something not covered in the policy, and second, they checked to see if any information provided by the insured wasn’t accurate. Even small misrepresentations could result in your claim being denied, Corless warns.

To avoid falling into this trap, keep some of these common home insurance mistakes in mind…

Mistake #1 – Assuming You Have Flood Insurance

No one likes to think about worst-case-scenarios, but they do happen. Even if you’re not in an area typically affected by flooding, a major storm – or a water main break – could put your home at risk.

“We are all in a flood zone – it is just a matter of whether you are in a catastrophic zone or not,” says Patti Clement, first vice president and managing director at HUB International, a personal insurance practice in North America.

With this in mind, did you know that homeowners’ policies exclude flood coverage?

“The common policyholder has a tendency to think that any water damage is covered,” says Eddy Lang, CEO of Housefax, a national data aggregation service for homebuyers and sellers, and an 18-year veteran of the insurance industry. “Most of the time they do not realize that there are specific water losses that are excluded from all homeowners policies.”

How This Mistake Could Cost You: “This mistake is huge,” says Kristofer Kirchen, president of Advanced Insurance Managers in Tampa. “Not having flood insurance can lead to a very costly uncovered loss – hundreds of thousands of dollars and a whole lot of heartache to boot.”

There’s another sneaky way you might accidentally end up making this mistake, according to Corless.

“Typically, mortgage companies protect their collateral at least up to the amount of their mortgage,” Corless explains. That means they might insist on certain protections like flood insurance. “Once this mortgage is paid off… many insurance companies will alter the coverage with obtuse, confusing documents, and flood insurance may not be incorporated into the policy.”

The lesson to be learned from this? “Confirm you have flood insurance before you need it,” Corless says.

Floods aren’t the only way moisture can damage your home. A slow water leak hidden in a wall could cause terrible damage, and could lead to the growth of dangerous mold, fungus, and mildew. And in case you’re wondering, no, flood insurance doesn’t cover sewage backups.

Another thing to be aware of is that the language used in your policy is very important.

“The word ‘sewer’ cannot be substituted for the words ‘septic tank,’ which is like a sewer but not exactly,” Corless explains. And that means if your sewer backs up, but your policy only covers your septic tank, your insurance claim could be denied.

How This Mistake Could Cost You: “If you don’t have coverage for mold or sewer back up, you run the risk of a big repair bill,” warns David Bakke, insurance expert and contributor to moneycrashers.com, a personal finance and lifestyle website. “And sewers can back up through no fault of your own. There are times when a back up can occur through the fault of the city or municipality where you live. The cost of mold removal could be as much as $30,000, depending upon the size of your home. It can also cost this much to clean a basement affected by sewage backup.”

Want to know how to protect yourself from this nightmare scenario?

“Make sure that you have an ‘All Risk’ policy that includes unlimited backup of sewers and drains and sump pumps,” advises Clement. “If there is a power failure and it causes the pumps to fail and you have flooding in the basement, this could be a way for the loss to be covered.”

Mistake #3 – Assuming You Have Earthquake Insurance

“Most insurance companies exclude earthquake damages unless it is specifically added on as an endorsement to the policies,” says Lang. “A lot of companies do not even offer the coverage. This coverage can be purchased as a separate policy offered by independent agents.”

So what should you consider if you’re looking into buying earthquake insurance?

“If you decide to buy an earthquake insurance policy, you should buy enough to cover the costs of rebuilding your home and replacing your most expensive assets, which is not always covered or evaluated when people purchase earthquake insurance,” says Corless. “The amount of insurance purchased should be determined by replacement and reconstruction costs, not the market value of your house and possessions.”

How This Mistake Could Cost You: “If you assume you have earthquake insurance and you don’t, you could lose your home and everything in it if an earthquake strikes,” warns Bakke. “According to data compiled from the resulting claims from two recent California earthquakes, the average cost [to repair earthquake damage] was roughly $36,000. However, many people lost everything. To get an idea of the true potential cost, add up the value of your home and all of its possessions.”

Keep in mind, you’ll continue to make payments on your home insurance policy for years, or decades, to come, so even seemingly insignificant differences in a monthly bill could add up to big money over time.

“Comparing rates with other companies or having an independent insurance agent ‘shop’ the policy for you can save you hundreds per year,” says Lang. “Most agents know how to maximize discounts with the companies that they work with. They can offer multi-policy discounts, new homeowner discounts, military discounts and even AARP discounts.”

How This Mistake Could Cost You: “Not shopping around for the best policy for your situation can be costly in four ways: paying more premium than you should have; having a loss that is not covered; having a company with insufficient claims-paying ability; and ending up with an agent who does not understand what he is selling inside and out,” says Kirchen.

What’s the biggest mistake in Kirchen’s opinion? Getting a bad agent.

“A good agent can make the first three issues I outlined moot – they should give you a policy with the best price, with the proper coverage, and with a company that has sufficient claims-paying ability and that is fair in its claims-paying procedures,” Kirchen adds.

It can be disastrous to be underinsured. But if you go too far in the other direction, hoping to prepare against every conceivable catastrophe, you could waste a lot of money buying insurance you don’t need.

“If, for example, you purchase earthquake insurance and the risk of that disaster in your area is nonexistent, you’re simply wasting money,” says Bakke. “Your best bet is to consult with a homeowners insurance agent familiar with your area to recommend which coverages are necessary and which you can do without.”

That leaves us with one big question: how much insurance do you need? This is a question Corless gets asked all the time, and he has some advice for homeowners on how to calculate a ballpark figure.

“Research the average price per square feet of your home and determine if you have enough coverage that way,” he suggests. Then you’ll know whether your current policy is adequate, inadequate, or if you’re paying for way more coverage than you need.

Worried you don’t have enough coverage? Find a good insurance agent and talk through your concerns with them. They may be able to suggest additional products to help, including replacement cost coverage.

How This Mistake Could Cost You: This one’s fairly obvious. “If you pay for coverage you don’t need, the consequence is unnecessary spending,” says Bakke. For example, “Flood insurance, depending upon where you live, costs roughly $400 per year. The same applies for any other coverage you buy, but don’t necessarily need.”

The moral of the story? Research and shop around to determine the best coverage and rates for you.