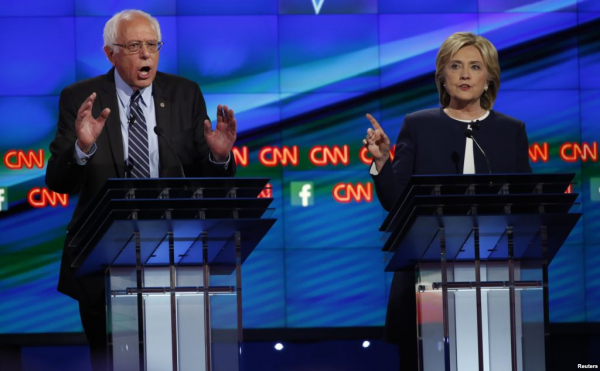 I was pleased as peaches that marijuana reform discussions took center stage on Oct. 13 in Las Vegas during the Democratic presidential debate. What would Hillary Clinton – whom I’ve met numerous times – do about legalizing marijuana? “I think that we have the opportunity through the states that are pursuing recreational marijuana to find out a lot more than we know today,” Mrs. Clinton said. Mrs. Clinton’s campaign refused a donation from the National Cannabis Industry Association while in Sept. she said she would not look to reverse decisions made by states to legalize cannabis.  In simple terms, Bill won’t inhale, and Hillary won’t talk.  This isn’t an answer, it’s a mosaic of complete malarkey, laid down one tile at a time.

With regard to medical marijuana, it appears Bill’s better half believes cannabis should be available under appropriate circumstances. I’m not quite sure what makes her qualified to speak on such matters seeing as how her name is not preceded by “Dr.” but perhaps the best we can do is embrace the frontrunner’s acceptance of change. “I do support the use of medical marijuana, and I think even there we need to do a lot more research so that we know exactly how we’re going to help people for whom medical marijuana provides relief,” indicated the former Secretary of State.

Meanwhile, the socialist with the mostest intoned, “I would vote yes because I am seeing in this country too many lives being destroyed for non-violent offenses.” Bernie Sanders (I-VT) discussed how the criminal justice system has a disparate effect on those blacks that smoke pot and cannabis should be a civil, not a criminal offense, subject to a fine.  Senator Sanders said he would vote in favor of a local Nevada measure that would legalize recreational pot use. “We have a criminal justice system that lets CEOs on Wall Street walk away, and yet we are imprisoning or giving jail sentences to young people who are smoking marijuana.”

Hillary Clinton doesn’t altogether disagree with Bernie Sanders.  “We have got to stop imprisoning people who use marijuana,” she said.  The former junior senator from New York is seemingly against having “a huge population in our prisons for nonviolent, low-level offenses that are primarily due to marijuana.”

For those unfamiliar with the dark horses in the 2016 presidential race, Jim Webb, former senator from Virginia, has endorsed a sizeable reform to America’s criminal justice system of which drug law reform would be a part. Former Rhode Island governor Lincoln Chafee signed legislation decriminalizing possession of small amounts of marijuana. He has also petitioned the federal government to reclassify marijuana from a schedule I to schedule II drug. This is a man after my own heart.  Maryland governor Martin O’Malley has said he supports loosening federal marijuana laws.

Debates are supposed to frame the issues. Democrats should be putting together a large-scale anti-Republican and pro-choice (marijuana, that is) package. Fortunately, the left did not ignore the mass incarcerations caused by the failed war on drugs and tribulations of marijuana prohibition.  It’s all a decent start.  After all, Colorado wasn’t built in a day.