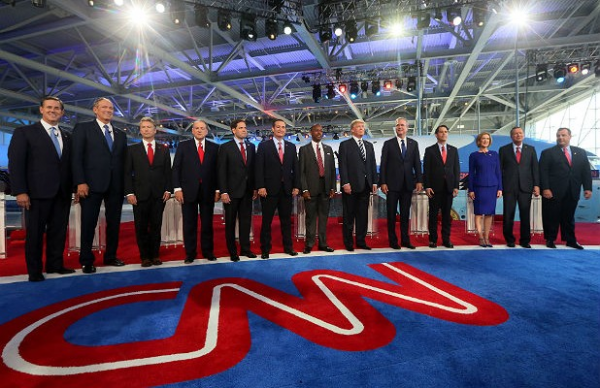 Social media was pulsating about whether the GOP candidates would enforce the federal laws against marijuana in places like Colorado where it’s legal. The presidential candidates met for their second debate on September 16, this one hosted by CNN at the Ronald Reagan Presidential Library and Museum in Simi Valley, California. Incidentally, Californians have been buying marijuana with medical exception cards since it was legalized by a 1996 ballot measure.

One of the key moments during Wednesday night’s Republican presidential debate came on the topic of marijuana. Thank goodness Colorado’s recreational marijuana law took center stage. Below are statements from the candidates along with my responses.

Rand Paul: “There is at least one prominent example on the stage of someone who says they smoked pot in high school, and yet the people going to — to jail for this are poor people, often African-Americans and often Hispanics, and yet the rich kids who use drugs aren’t.”

Ted Corless: You libertarian-like hopeful say states should be allowed to legalize marijuana if they so choose. However, support for full legalization wasn’t exactly leaping out of your mouth. You were careful to tout states’ rights without committing to the whole enchilada, and that I have a problem with.

Jeb Bush: “Here’s the deal. We have — we have a serious epidemic of drugs that goes way beyond marijuana…But if you look at the problem of drugs in this — in this society today, it’s a serious problem. Rand, you know this because you’re campaigning in New Hampshire like all of us, and you see the epidemic of heroin, the overdoses of heroin that’s taking place.”

Ted Corless: OK, so you admitted to smoking pot, which isn’t headline-worthy since nearly 5.4 million people in the United States do so daily. The gateway argument is the best my former Governor can come up with? Scientists long ago abandoned the idea that marijuana causes users to try other drugs. Now what, Jeb!? Trust me, you don’t have to apologize to your mom for smoking weed — the stats say she probably did it too.

Carly Fiorina: “My husband Frank and I buried a child to drug addiction. So, we must invest more in the treatment of drugs…I agree with Senator Paul. I agree with states’ rights. But we are misleading young people when we tell them that marijuana is just like having a beer. It’s not. And the marijuana that kids are smoking today is not the same as the marijuana that Jeb Bush smoked 40 years ago.”

Ted Corless: You make this personal plea against drugs based on your stepdaughter’s horrific death in 2009 at age 35. But I don’t want voters to confuse that tragic tale with the facts. Study after study has shown that marijuana is no worse than alcohol. Most medical professionals say that if you look at any metric, pot really looks like it’s safer than liquor. Remember, criminal activity tied to marijuana has to do with illegal distribution, not violence committed by people who smoke it. Countless doctors and researchers say their findings show the dangers of marijuana may have been overestimated in the past, while the risk of alcohol has been commonly underestimated.

Chris Christie: “Look at the decrease in productivity. Look at the way people move on to other drugs when they use marijuana as a gateway drug…That’s why I’ll enforce the federal law.”

Ted Corless: You scare me. You frighten me – a lot. You have promised that if elected president you will vigorously enforce the federal ban on marijuana in states that have legalized the drug. Once again, marijuana as a gateway drug is a mythological argument that will not die, especially amongst Republicans like you and Jeb. The notion that while marijuana itself may not be especially dangerous but it leads to harder drugs like heroin and cocaine has been emphatically dispelled.