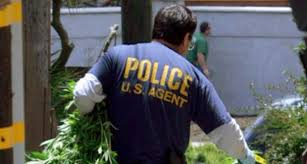 In August 2015, Colorado cannabis hit a new milestone: Sales soared past the $100 million mark for the first time.  If you think that means it is safe to buy cannabis in states where it is legal, you might want to hold for a moment.

Dare I say that state legalization is a myth in light of news that a magistrate judge in Massachusetts, a state with So Called Legal Marijuana, will consider whether to approve a complaint filed by the Boston Police Department seeking multiple charges of distribution of a Class C substance, which covers THC-based products that Bill Downing admitted he sold, as well as distribution of marijuana.

Authorities allege that Downing, 57, “is using medical marijuana laws to conceal his illegal activities of distribution of marijuana and its extracted by-products.”  Boston police are looking to bring criminal charges against Downing, one of Massachusetts’ most devoted advocates of the legalization of marijuana.

The number of crackdowns and prosecutions has dropped, though not completely.  The entire structure of preventing the deposit of cannabis sales into federally controlled banks actually invites criminal activity, and exposes the thousands of cannabis employees to the danger of armed violence.

The Justice Department can be told to “back off” but they have no incentive (or legal support) to do so. Federal law still classifies marijuana in the most dangerous category of narcotics, alongside heroin and LSD, which the law declares to be lacking any accepted medical use. Congress has declined to change that, and POTUS loves to talk about pot, but nothing more.

“I’m not going to be using Justice Department resources to try to circumvent state laws [on medical marijuana],” Obama promised in 2008.  But facts don’t lie. Neither do statistics.  The Obama administration has unleashed an interagency cannabis crackdown that goes beyond anything seen under the Bush administration.

Republican presidential candidate Marco Rubio told Chuck Todd, “I believe the federal government needs to enforce federal law.”  Given Republican proclivity to invoke states rights theory, the Florida senator’s answer may appear at first blush to be contradictory. However, we often forget that these raids are appropriate under federal law.

The Drug Enforcement Administration continues to place marijuana in the most dangerous category of narcotics.  This basically leaves people that consume, possess, and sell pot subject to crackdowns, arrests, and prosecutions.

It is long overdue for a comprehensive reexamination of our drug policy while we clarify our goals, examine our strategies, and consider alternatives to the crackdown of marijuana.